If you spend a considerable amount of time in the United States, this may result in you being considered a resident of the United States. The US applies what is known as the substantial presence test to determine whether an alien (a non-US citizen) should be deemed a resident for US tax purposes. The test applies as follows:

Count the number of days you spent physically in the US this year, last year and two years ago, and apply this formula:

If the total ( A + B + C) is equal to or greater than 183, and you are present in the US for more than 31 days in the current year, then you meet the substantial presence test, and will be considered a US resident.

Note that a US day may include being in the US even for a mere few hours. For e.g. even a day-trip to go shopping, may count as a day.

There are a few circumstances where you can be physically present (in the US), but the day will not count towards the substantial presence test. An example of such would be if you were in transit between two locations outside of the United States. For instance, if you were to fly from Mexico City to Montreal, Quebec, by way of New York, the stop in New York would not count as a day.
Closer connection exception

The substantial presence test will not apply to you if:

· You are physically present in the United States for under 183 days,
· You have a tax home in another country
· You have a closer connection (as defined under US domestic law) to that country,
· You have not applied for a green card, and
· You file form 8840 on time (June 15 of the following year, but you can apply for extensions).

Connections with a country may involve personal ties, such as your spouse and immediate family, your work, and your home. Secondary connections may include your social, religious, political affiliations, etc.

You can elect to file (Form 1040NR and/or Form 8833) as a non-resident alien under the treaty, even if you don’t meet all the requirements for the closer connection exception. All you have to do is meet one of the treaty requirements. If after considering these requirements in accordance to the Treaty, you can not establish specific ties to Canada, but such ties apply to the US, you will be considered a US resident (form 1040 will be required in such case).

The following is a summary of the above referred to criteria as outlined in Article IV in the Canada-U.S. Tax Treaty:

a. You have a permanent home available to you in Canada, but not in the United States. A permanent home need not be owned by you. It can be rented; it can be provided by your spouse, employer, or friend. A home that is rented to a third party may still be “available”, if the tenancy is of short duration, or is to a related person.

c. You have an “habitual abode” in Canada, and not in the US. An habitual abode is a place that you regularly sleep. You need not sleep there a majority of the time – just regularly.

d. You are a citizen of Canada, and not of the United States.

e. If none of the above tests is conclusive, then it is possible to apply to “competent authority” for a ruling. 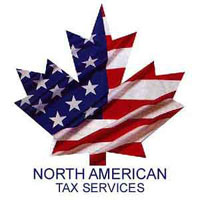 Return to Our Home Page